Portraits: under the skin 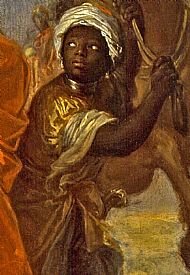 Mocho was an enslaved African from Guinea who lived in the households of two Scottish Jacobites in Europe - George Keith (1692/3?–1778), tenth and last of the Earls Marischal of Scotland; and his brother James Francis Edward Keith (1696–1758), a soldier in Spanish, Russian and Prussian service.

Click below to see an image of the original painting in the National Portrait Gallery: 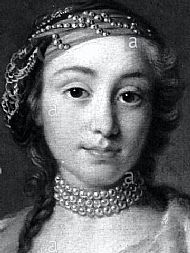 This portrait was part of the Elphinstone Collection at Carberry Tower, before Carberry was gifted to the Church of Scotland in 1961. It was named ‘Portrait of a Turkish lady’ and there is a stock photograph on Alamy (detail right). Does anyone now where the original is?

The portrait is of a remarkable woman, Emet Ullah. Born in the 1720s she was captured as a girl at the sack of the Ottoman stronghold of Ochakow (Ukraine) in 1737, ‘given’ to George Keith, 10th Earl Marischal (the exiled Jacobite) and brought up by him in a multi-cultural household which included the remarkable 'Ménagerie of Young Heathen’ known to Voltaire: Emet Ullah, Mocho from Guinea, Stepan (a Buddhist Kalmyk from the north Caucuses) and Ibrahim (another Turk). She knew Voltaire and Rousseau, travelled with James Boswell and the Earl by coach from Utrecht to Berlin in 1764 (Boswell was attracted to her and flirted), and both David Hume and Adam Ferguson knew of her. She lived in Paris, Berlin, Potsdam, Berlin and Neichatel. She was in Edinburgh in 1764 with the Earl — and there is a ribald joke about her in a letter from Ferguson to Hume. She lived into her 90s and died at Neuchatel in 1820.

The Cruikshanks of Gorton (Strathspey) and St Vincent 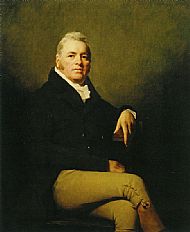 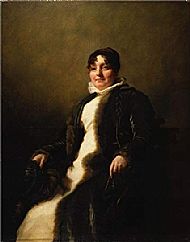 These portraits by Henry Raeburn of Mr and Mrs James Cruikshank hang in the Frick Museum, New York.

Click on either image to read about the Cruikshanks' origins in Strathspey, their history of slave-holdin in St Vincent, and their estates in Scotland. This also described their role in the expulsion of the Black Caribs (the Garifuna) from St Vincent.

For my presentation to North East Scotland Colonial Connections conference (June 2021) follow this link to the Art, Architecture & North East Landscape session. My contribution is 33 minutes into the discussion.